Controversy has been used as a sales technique since back in the day where female models would show a ‘little bit of ankle’ in racy 1800’s soap advertisements.

Okay, maybe that didn’t happen. But if it did, you can be sure that the soap would have got a lot of attention.

Controversy works as a sales technique by the simple fact that we are drawn to things that are shocking. This phenomenon was eloquently phrased in Joseph Conrad’s famous novel Heart Of Darkness, as “the fascination of the abomination.” In life, we watch controversial news stories on TV, we watch reality TV shows for controversy and we even discuss controversial things that involve people we know. Innately, controversy is interesting to us – interesting because it has a strong effect on people’s emotions.

It is for this reason, that it is an incredibly powerful advertising tool.

But as Spidey says, with great power comes great responsibility and for every campaign that has successfully used controversy to sell their products, there are 50 campaigns that have failed miserably.

Today we are going to look at an example of both successful and unsuccessful shockvertising campaigns and then try to discern what worked and what didn’t. In the spirit of keeping things controversial, let’s look at the one that was not received well first. 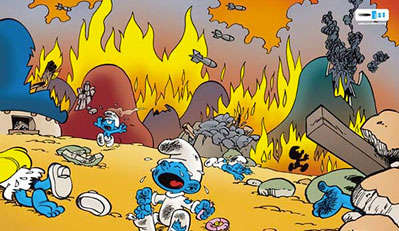 In 2005, Belgian TV aired a commercial funded by UNICEF that took the ‘Smurfs’ cartoon in a slightly different direction to its usual child-friendly ways. The TV ad showed the cartoon Smurf village being bombed and decimated. Smurfs were killed, the baby Smurf was crying as chaos filled the screen. The text featured at the end of the advertisement read, “Laat oorlog de wereld von de kinderen niet verwoesten.” which translates roughly to “Don’t let war affect the lives of children”.

The campaign was designed to raise $150,000 to rehabilitate child soldiers who had been forced into war.

This campaign was not received very well and outraged people around the world. Many parents were offended because the ad used The Smurfs, which is watched by children. Parents believed that children who saw the ad and would not have been able to make sense of the message and would just be left with pure shock.

UNICEF defended the ad, stating that its message was sound and appropriately confronting. Although it was shown nation wide on Belgian TV, the UN stopped hosting the video on its own site “in the interest of limiting the opportunities for children to view the cartoon”.

Now let’s look at something that has had success.

Back in 1987, mainstream society in Australia was deathly afraid of the AIDS virus. For obvious reasons, a part of this fear was warranted. However, a big part of the fear came from the lack of information about the virus combined with a frightening ad campaign. One of the most controversial commercials in Australia’s history was projected on TV screens all around the country and had a massive impact on its viewers.

The ad consisted of the Grim Reaper holding a bowling ball in a smoky, dark room. He bowls the ball down the room and it knocks over a group of people who were standing at the other end. The people are from all backgrounds – black, white, old, young, men and women. As the people are knocked down, a new group of are placed in their position and the Grim Reaper starts bowling again. As the cycle continues, an ominous voice over alerts the viewers that the virus can affect anyone and may kill more people than WW2.

In retrospect, this ad is generally viewed as very offensive. It demonized people who were affected with the virus and frightened the hell out of those who didn’t. However, even though a similar ad would not last 2 seconds on air today, the impact of the campaign was evident.

A potential reason why shockvertising is more accepted in some situations compared to others is the justification behind the shocking content. In situations where there is a decent justification for going to extreme lengths to get the message across, it seems to be seen as justified.

However, it could be argued that both of these ads had a ‘justified’ reason. They were both in the interest of saving lives, so what is the difference? One possible reason behind the reactions towards each is if the viewer understood the message. In the Grim Reaper commercial, the message is shocking. Shocking, but very clear – “AIDS is a deadly disease so practice safe sex”. The Smurf ad on the other hand was more vague. The connection between the message and the visuals was weaker, which meant that there was less justification for the shocking images in the eyes of the viewer.